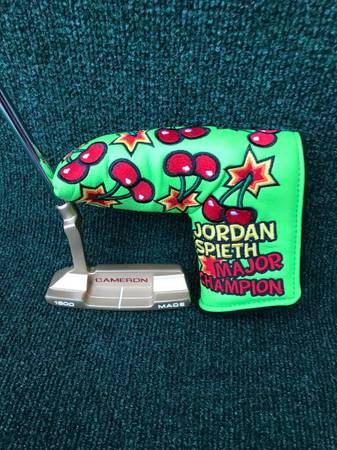 For pick up only on the Northwest side of Houston, TX. Sorry, I dont ship.scotty Cameron issued the Jordan Spieth limited edition to 1500 signature putter to recognize Jordans performance on the PGA Tour in 2015 which included the following- Won Masters tournament - Won US Open - Won PGA Chionship- Won FedEx Cup Chionship- Won Byron Nelson Award- Won Vardon Trophy- Awarded PGA Tour Player of the YearThis Scotty Cameron 2015 Jordan Spieth putter is a replica knockoff fake, however the TSC Jordan Spieth Cherry Bomb Head cover is authentic. As shown by the photos, it has a tag label on the inside of the head cover that reads Made by AME Exclusively for Titleist on one side and reads Made in U.S.A. on the other side of the tag label.It measures 35 in the playing position, has a stepless steel shaft with a Scottys Custom Shop shaft label and a Scotty Cameron pistol grip.Note The two 2 15 gram circular weights on the bottom sole of the putter head are not removable and exchangeable with either lighter or heavier weights.You can pick up this new replica knockoff fake Jordan Spieth limited edition signature putter with its authentic matching cherry bomb head cover for a fraction of the price that the putter is selling for on various internet sites. Check um out.

Take steps to make your ForSale.Plus transactions as secure as possible by following our suggested safety tips. Read our Safety Tips